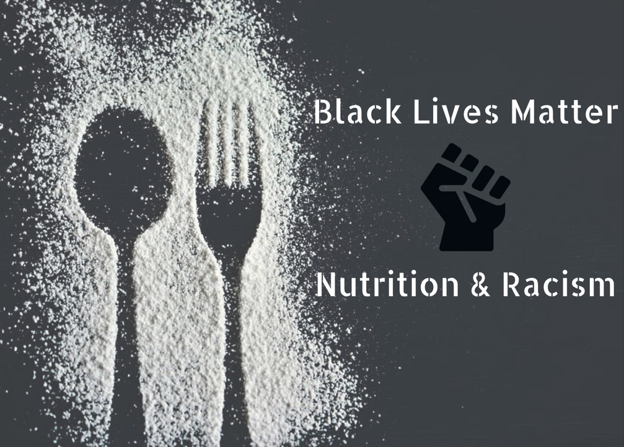 By now, many of our readers have likely heard of the tragic and inexcusable murders of Ahmaud Arbery, Breonna Taylor, George Floyd, and many other unarmed Black people killed in our country. These most recent deaths have shaken the world like no other and highlight the long-standing issue of racism within the police system. Law enforcement, however, is not the only system ingrained with racism. Racist policies and practices in education, healthcare, incarceration, and employment have all failed many Black people in the US. Additionally, and I will say this directly and unapologetically,

Racism persists in the field of nutrition and affects the subsequent health of Black people.

Systemic racism involves the existence of policies, laws, or practices that lead to unequal access to goods, services, and/or opportunities based on race. Systemic racism has been described as a social determinant of health by many scholars and is considered a serious public health issue. Historically racist policies and practices in other systems have directly affected access to healthy food, high-quality education, high-paying jobs, and increased chronic stress. These factors combined with persistent racism in the healthcare industry (in part due to a lack of cultural competency) and a lack of research are just some of the reasons experts say systemic racism has led to Black people being disproportionately affected by diet-related diseases.

Racial disparities in food insecurity are one of many ways Black people have been affected by systemic racism in the United States, as described in the figure to the left. A major driver of food insecurity is poverty. With 24% of Black Americans living in poverty, 20% of Black people were food insecure in 2016 compared to about 9% of White, non-Hispanic Americans. High rates of poverty in Black communities can be traced back to policies and practices which prevented (and continue to prevent) the economic advancement of Black people. This includes hiring/employment discrimination, poor funding of the Equal Employment Opportunity Commission, and residential segregation. Poverty is also deeply intertwined with other racist policies and practices in both the education system and the justice system. The complex relationship between these systems can lead to a cycle of poverty making it difficult to improve food access from generation to generation. The diagram below is a visual representation of just some of the ways systemic racism is contributing to racial disparities in nutrition.

It’s important to note, though, that socioeconomic status (SES) alone does not explain all of the existing racial disparities in nutrition. One reason disparities may persist is because of the high levels of chronic stress that Black people experience due to racism. Chronic stress can contribute to nutritional deficiencies and puts people at high risk for certain diseases including coronary heart disease and type 2 diabetes.

Another factor to consider is the mistreatment of Black patients and a lack of cultural competency by health professionals. Cultural competency is the ability to understand and communicate with people from different cultures and involves maintaining attitudes, perspectives, and behaviors that encourage effective interactions with those of different backgrounds and cultures. Developing true cultural competency requires one to challenge their beliefs and internal biases about a group of people and learn about their culture in order to more effectively serve them. Cultural competency has been shown to improve patient satisfaction and adherence to recommendations among diabetes patients. The medical field is still currently lacking effective training in cultural competency despite growing evidence of its importance. Not addressing implicit bias can impair a person’s ability to develop cultural competency. Implicit bias is prejudiced ideas, attitudes, and stereotypes that often cause someone to behave with prejudice without intending to do so. In the medical field, some white providers tend to view Black patients as less intelligent, unable to adhere to recommendations or treatments, more likely to engage in risky behaviors, and less cooperative. Low to moderate levels of implicit bias against Black people has been observed in many clinical settings. Since implicit bias influences the quality of care that Black patients receive from doctors and dietitians, it needs to be addressed consistently in their training in order to provide adequate care.

There is also a significant lack of quality research dedicated to studying not only the reasons for these disparities but interventions that can most effectively serve Black communities. Nutrition education interventions, in particular, continue to be ineffective for Black people, in part because intervention programs are not a one size fits all method. It cannot be assumed that an intervention that is effective in a predominantly White community will also be effective in a Black, Native American, or Latinx community. There are various cultural, economic, environmental, and political considerations that need to be made when proposing and establishing an intervention.

Finally, the field of nutrition is predominantly white which limits the diversity of thought and is a contributor to the lack of research and anti-racism training in nutrition. The marginalization of Black people, as previously described in this article, will continue to impact their representation in the field. And without Black voices and the voices of allies, training, education, and research about racial health disparities will continue to be minimal and ineffective.

While this article is by no means an exhaustive list of all the ways racism impacts nutrition, my hope is that it will highlight the areas in which we are weak in order for our field to become truly anti-racist. In the words of Angela Davis, “It is not enough to be non-racist, we must be anti-racist.” If we do not work harder to dismantle racism in our society, we are complicit and part of the problem. If we do not address these concerns in nutrition, we are complicit in allowing these preventable disparities to continue, or worse, become more dramatic. I encourage my fellow nutrition researchers who are reading this to take this opportunity to consider how their research practices are affecting Black people. And I encourage my fellow Americans to continue to read and educate themselves on how their field can be improved to better serve the Black community and other people of color.

Header Image Credits: Icons made by Freepik from www.flaticon.com https://www.pxfuel.com/en/free-photo-qhkvp