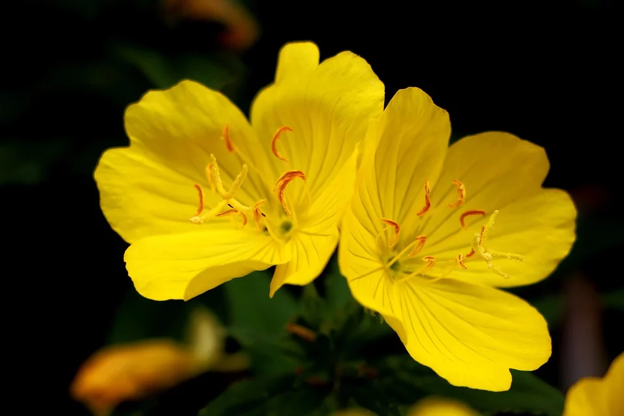 Atopic eczema, psoriasis, mastalgia, premenstrual syndrome (PMS), rheumatoid arthritis, Sjögren’s syndrome, coronary heart disease, gastrointestinal disorders, endometriosis, and dementia; what do all these diseases have in common? Evening primrose oil (EPO). It has been at the center of multiple clinical trials testing the efficacy of EPO in the management of all these ailments, and particularly in female-related conditions. Recently, I recommended to a friend who had suffered from severe PMS symptoms for over a year to give EPO a try, and after a month of 1.5g of the supplement a day, her PMS symptoms were surprisingly resolved. I initially recommended the EPO supplement as a mild guess that it would help, as I’ve read long ago that it’s a traditional remedy used by midwives. Initially, I couldn’t believe its extraordinary efficacy. After some digging in the scientific literature, I found a vast ocean of clinical trials ranging over dozens of conditions that used EPO to alleviate symptoms. I was astonished at the versatility of this plant, how can this herb be so omnipotent?

How does it work?

Evening primrose oil is an oil extract of the seeds from the Oenothera biennis plant. The oil is filled with fatty acids and polyphenols. The fatty acids abundant in EPO are linoleic acid (70–74%), an omega 6 fatty acid, and γ-linolenic acid (8–10%), an omega 3 fatty acid. It is hypothesized that the γ-linolenic acid in EPO is the most bioactive component leading to the alleviation of symptoms. When γ-linolenic acid is consumed it is converted to the metabolite dihomo-γ-linolenic acid, which undergoes a series of biochemical reactions that eventually lead to the production of anti-inflammatory metabolites (i.e. series 1 prostaglandins). However, some have asked, since EPO is abundant in omega 6s and omega 6 fatty acids have been linked with increased inflammation, why would it still be an effective supplement? There are multiple hypothesized explanations, but I will focus on 3 of them:

In all, more research is needed to identify the exact mechanism of action for evening primrose oil. However, that does not undermine the current clinical evidence regarding EPO supplementation.

What does the clinical literature say?

The clinical literature for EPO supplementation is extensive, with studies covering ailments for numerous conditions. However, I will focus on premenstrual syndrome (PMS) and mastalgia, conditions that plague 20-40% and 68% of US women, respectively. PMS is often accompanied by anxiety, depression, acne, fatigue, insomnia, bloating, and headaches. There are over 7 placebo-controlled clinical trials and 2 randomized placebo-controlled trials evaluating the benefits of EPO supplementation in PMS. One of the most notable randomized placebo-controlled trials evaluated the efficacy of EPO supplementation daily (1.5g/day) for three months. Eighty women with clinically diagnosed PMS symptoms were randomized into either an EPO supplementation group or a placebo group. At the end of the 3-month period, there was a significant improvement in the EPO group’s PMS symptoms compared to the placebo. The PMS severity scores in the EPO group dropped significantly; whereas, the placebo had little to no change.

On the other hand, mastalgia, or breast pain may be cyclical or non-cyclical. It is proposed that cyclical mastalgia is more likely to occur when there is a deficiency in γ-linolenic acid or its metabolites, making breast tissue more sensitive to cyclic sex hormones. Similar to the PMS and EPO literature, there are dozens of EPO studies with mastalgia. A single-blinded clinical trial for cyclical mastalgia included 61 women 18-40 years old who were randomly placed in either a group receiving 3g of EPO daily or 600mg of vitamin E three times a day for the span of one month. The severity of pain was significantly reduced in both groups; however, the EPO group showed a larger improvement. About 96% of the women receiving the EPO treatment had either an improvement from severe pain to moderate or no pain, and the vitamin E group had a 76% improvement. For this reason, many later clinical trials included supplement formulations with both EPO and vitamin E. However, the combination of EPO and vitamin E did not seem to be more effective than EPO or vitamin E alone.

Altogether, EPO has been shown to be beneficial for the treatment of common ailments that affect most women today. More studies are continuing to establish EPO’s effects in other diseases related to γ-linolenic acid’s immunological benefits. In the meantime, we can look forward to harnessing the power of this traditional herbal remedy and continue to discover the many assets EPO has yet to offer.